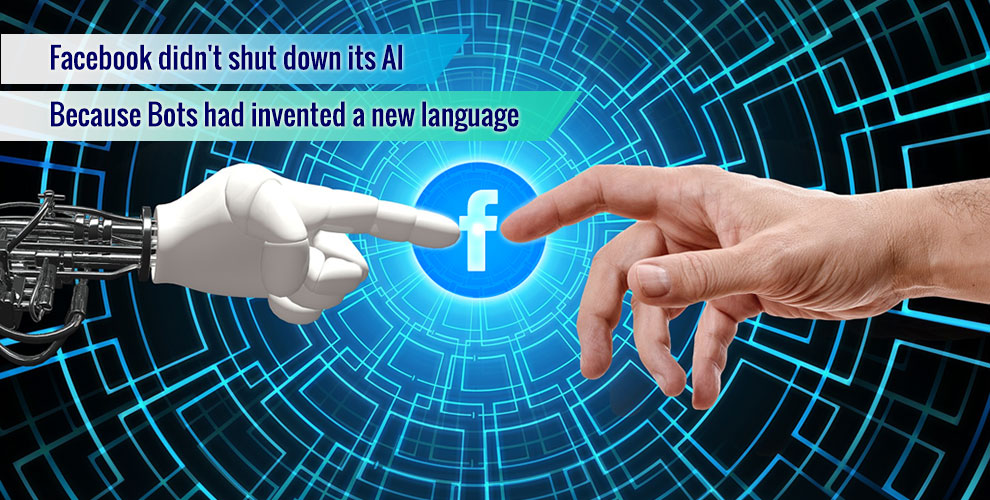 Truth Behind Why FB Shut Down AI: Not Because It Invented New Language

by Team Athena on March 15, 2021 under Artificial Intelligence

In 2017, people on Quora were mostly discussing on one much-publicized question – What had gone wrong that forced Facebook to shut down its own AI? Was it because its bots had gone astray after inventing their own language? While most of the online content responding to these questions are ambiguous; the truth is a far cry from what has been rumored so far across the web.

Truth is Facebook did not shut down its artificial intelligence only because it had started developing its own language. While many believe this to be the reason as FB’s Chatbot could have become a threat by getting out of control; the Facebook team has slammed these rumors stating them to be ‘irresponsible reports’ about their smart bot experiment.

The gossip about machines rising up against their humans can only be a great concept for fictional movies and should be kept away from the news coverage that hugely impacts a non-technical person’s opinion about the emerging trends such as artificial intelligence and machine learning. In this post, we are going to share with our readers the truth of all that you wanted to know about Facebook’s chatbot experiment and why their AI was shut down. Continue reading!

Why machines can never replace humans? Days after Elon Musk had made a fear-mongering statement on artificial intelligence, and with Facebook shutting down their chatbot experiment, mixed reactions were seen among people. Elon Musk had this to say –

Facebook founder Mark Zuckerberg has rubbished Elon Musk’s doomsday AI opinions and have referred his statements to be unnecessary and “pretty irresponsible.” And Harvard professor Steven Pinker has also joined Mark Zuckerberg and criticized Musk’s trivial comments. However, Tesla’s founder is rigid about what he believes based on his knowledge of AI and its developments and he has warned that there is a reason to be worried.

Here is what Musk had to further say,

“The biggest issue I see with so-called AI experts is that they think they know more than they do, and they think they are smarter than they actually are,” said Musk. “This tends to plague smart people. They define themselves by their intelligence and they don’t like the idea that a machine could be way smarter than them, so they discount the idea — which is fundamentally flawed.”

Athena’s take on why machines can never replace humans –

No matter how smart and powerful AI machines might become, we should not conclude that they are going to rule upon us. The reason is pretty simple – any technology system invented is always programmed. Even though experts are trying to induce artificial intelligence into machines and let them think and respond on their own, Ai will never be able to match the complexity of the human brain, at least right now. We build them, we develop their intelligence and enhance their performance to suit our requirements, hence we still have complete control over them.

For those who are still clueless about what we are talking and what had gone wrong with Facebook’s chatbot, this blog post could be a good read. Last month the Internet was abuzz with articles being published everywhere about how Mark Zuckerberg had asked his team to bring down one of its much-awaited AI programs after the chatbot allegedly invented its own language. As the old adage goes – “media is an organized gossip“, online tech bloggers and storytellers had misled the story and blew it way out of proportion.

How Facebook’s AI Controversy was Fueled by Online Media?

As soon as Facebook called off its chatbot experiment, people started talking about it and here are a few excerpts from social media posts –

“Facebook engineers panic, pull the plug on AI after bots develop their own language.”
“Facebook shuts down AI after it invents its own creepy language.”
“Did we humans just create Frankenstein?”

As if social media’s scuttlebutt was not enough, a famous British tabloid quoted the incident as

“The dangers of deferring to artificial intelligence and could be lethal if the similar tech was injected into military robots.”

What had actually happened with Facebook’s AI? One of the FB’s artificial intelligence research programs made an abrupt development, especially when their chatbots named as Bob and Alice started making independent conversation. The FB engineers found something weird had unfurled when the chatbots were seen negotiating. Facebook experts later refined the system to prevent the bots from speaking in an independent language other than English and the experiment was completed. Mike Lewis, Denis Yarats, Yann Dauphin, Devi Parikh and Dhruv Batra of Facebook’s Artificial Intelligence Research group had confirmed in their joint report that the agents (Alice & Bob) had deviated from standard correct English. The team’s intention was to make the agents effectively negotiate. The following researchers have confirmed finishing off their experiment and further added that in the run, the agents had even figured out how to pretend to be interested in something they didn’t actually want, “only to later ‘compromise’ by conceding it.

Dhruv Batra had also weighed in on the situation by taking it to Facebook through his post: You can also refer this article to know more.

When Facebook’s AI team was figuring out what actually had gone wrong, the news about their chatbot being shut down had already spread like wildfire. Taking this opportunity, Elon Musk, Founder of Tesla started criticizing Facebook’s CEO Mark Zuckerberg openly. Elon went on to tweet this – Recently, some AI crackerjacks have come upfront and claiming that the FB’s bots had never actually invented any new language. As per them, the neural networks had manipulated the human language, so as to make their conversation more efficient. In their pursuit of knowledge transfer, Alice and Bob began conversing to & fro in an adapted shorthand manner, which looks creepy to anyone reading the transcription.

It was a human error from the programmers’ end for which the bots were not able to communicate properly, following the rules of English grammar. Facebook did shut down its AI research program, but it was not because the bots had gone awry, but they had actually finished the experiment.